Fusion-JSON can be used as an import and export format in Fusion Metadata Registry for both data and structures.

It is the only format that supports all of the structures used in Fusion Metadata Registry. 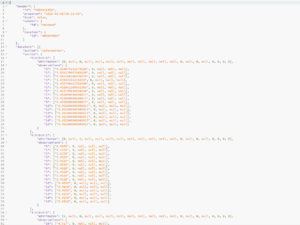 Fusion-JSON is therefore self-describing in that it contains both the observation data and structural metadata needed to interpreted making it better suited for driving visualisations and user interfaces than SDMX-ML where the metadata needs to be retrieved separately.

The series keys do not follow the SDMX convention, rather following the form:

The numbers are indexes to the information in the "structure" section. Thus the first digit "0" in the key 0:3:0:0:6 references the first dimension, and the first in the list of values given for that dimension.

Indexing is zero based.

For efficiency, the list of values only includes those actually used in the data. The list for a dimension using a Codelist with 1000 possible codes but with data for only two of those codes, will have two entries indexed "0" and "1".

FusionJSON for structures follows a schema unique to each structure.