An SDMX Codelist is a managed list of classification codes.

Codelists can be referenced directly by Data Structure Definitions, or indirectly through Concepts to explicitly define the closed set of values for enumerated Dimensions, Attributes or Measures. 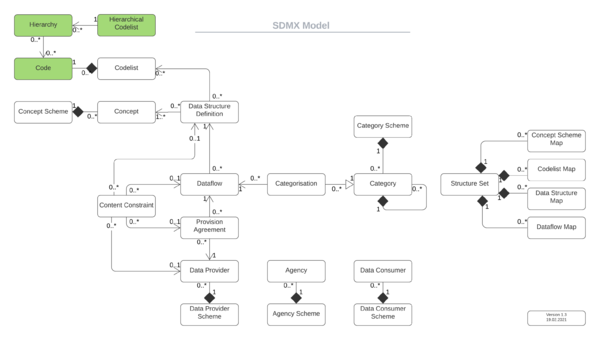 Each code is a separate Item so must have an ID and a Name, but can also have an optional Description. While Code IDs must be unique within a Codelist, the same Code ID may be safely used in other Codelists. For instance: The code 'A' may be used in a Frequency Codelist to represent 'Annual', but also appear in an Industry Codelist to represent 'Agriculture'.

Codelist IDs are given a 'CL_' prefix to distinguish them from other structures. For instance: CL_FREQ, CL_REF_AREA, CL_AGE.

Codes can take any legal SDMX ID. But there are several conventions that should be taken into account when choosing Code IDs:

Flat Codelists are simple lists of codes with no explicit or implied relationships or hierarchies.

SDMX allows simple hierarchies to be defined within flat Codelists by making a code the parent of codes that logically sit under it in the hierarchy.

Imagine a CL_REF_AREA Codelist containing individual codes for each European country, and a code (EUR) for Europe as a whole. A simple hierarchy for Europe can be created by setting EUR as the parent for each of the countries:

Other than acting as a parent, EUR behaves as a normal code allowing series for EUR or any of the individual contries.

A Code can only have one parent meaning that it can only appear once in a simple Codelist hierarchy. This may be restrictive where Codes can be logically organised into multiple different groups. In the CL_REF_AREA example, countries could also be grouped into trading blocs in addition to geographical regions.

Hierarchical Codelists are a separate structure used for describing complex hierarchies of codes, potentially including codes from multiple different codelists.

As a Maintainable structure, the period in time during which a complete Codelist is considered to be valid can be defined.

Validity periods can also be defined individually for each Code item in a Codelist. A common use case involves country codes that are only valid between particular dates when the country was in ‘existence’. It also supports the case where a code changes meaning over time.

Example:
The Gilbert and Ellice Islands had the ISO country code ‘GE’ until 1977 when split to become the independent countries of Kiribati and Tuvalu. When Georgia gained independence from the former Soviet Union in 1991, the ‘GE’ code was reused. Setting the Item Validity on the GE Code allows this change in meaning to be described and stored with the Codelist.

In practical terms, Item Validity allows data with dimension codes that vary in meaning over time to be robustly validated and correctly disseminated.