See this article for more information on authoring and maintaining structures.

The steps in a MSD Wizard includes step 1 which provides the generic, high level details about the Metadata Structure Definition. See this article for more information on authoring and maintaining structures.

The second step requires information on the Report and allowable Targets. Targets can include Data related targets, this includes:

Structure targets can include any Identifiable Structure, or specific structures can be selected. 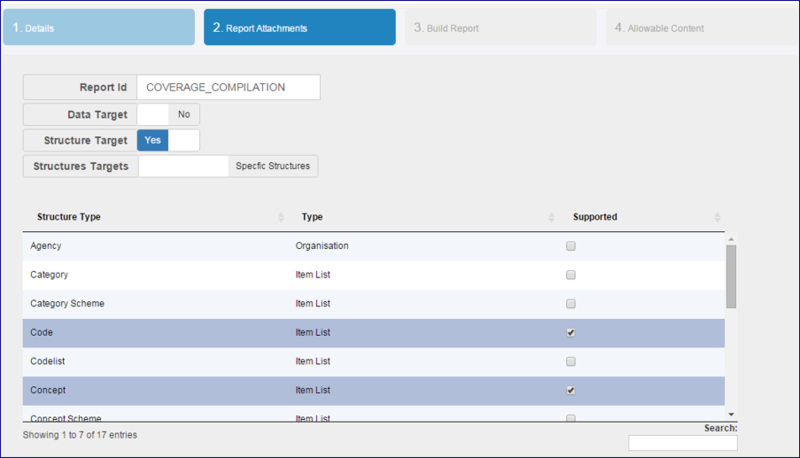 The third step is used to build the report template definition, by building the Report Attributes hierarchy. Each Reported Attribute must reference a Concept (which provides the name and description). This step can be used to build a hierarchy by using drag and drop.

The final step in the Metadata Structure Wizard is to specify the allowable content for each Metadata Attribute. Content type includes formats such as HTML, String, Numerical and enumerated formats, amongst others. For textual content (HTML, String) the MSD can also define if multilingual text is supported. If multilingual support is set to true in the definition, then Metadata can be reported for the Attribute in multiple languages. 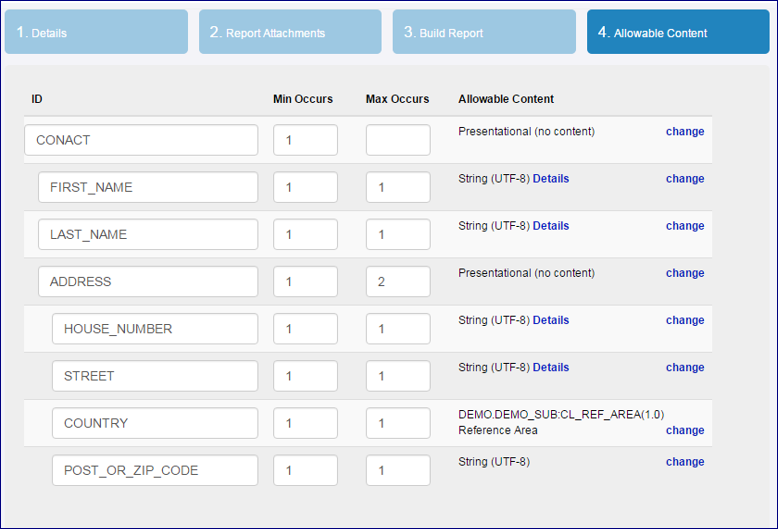 As shown in the above contact report, this step also allows the user to specify the minimum number of times the Attribute can appear in the Report. A Min Occurs of 1 would indicate that the Attributes appearance is mandatory. If Max Occurs is left empty, then this will be interpreted as unbounded (it can be reported multiple times with no imposed limit). In the above example there is no upper limit on the number of Contacts, but there must be at least one. In the above example each Contact must have 1 Address but no more than 2. Each Address must have a house number or name, a Street, Country, and Post/Zip code. The list of countries will be provided by the Reference Area Codelist that the COUNTRY Attribute has been linked to.