An SDMX Agency is an Organisation type which is responsible for maintaining Structural Metadata. 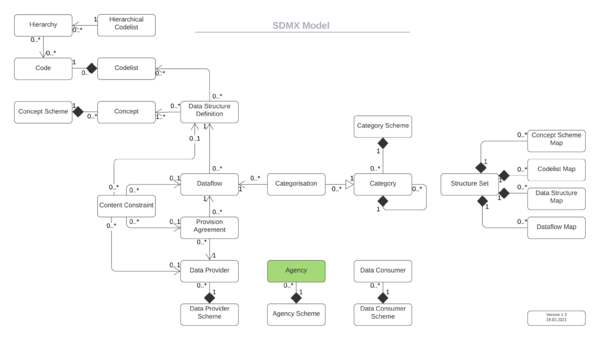 An Agency has a Globally Unique Identifier, typically a short upper case string such as BIS, ECB, ESTAT, IMF, OECD, WB. This Id is used as part of the identify of all the Structural Metadata the Agency owns and maintains. If the Agency has a parent Agency then the parent Agencies Id is used as part of the Identification of the sub-Agency, for example BIS.STAT would refer to an Agency with Id STAT which is a member of, and therefore owned by, the BIS Agency. The sub-Agency STAT in the previous example would have its own Agency Scheme to maintain its own list of Agencies (if there are any sub agencies of the STAT department). The relationship between Agencies and sub-Agencies is covered in more detail in this Agency Scheme article.

Other than an Identification, an Agency has a Name (multilingual), Description (multilingual) and can have zero to many Contacts.