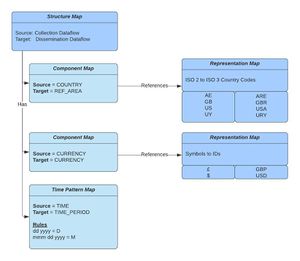 Simple example of a structure map

SDMX Version 3.0 Structure Mapping provides the ability to define a relationship between datasets conforming to a source DSD, to datasets which conform to a target DSD. This relationship allows for the automatic conversion of data from one structure to another. For example a source dataset may contain 8 Dimensions and use certain coding schemes, which may map to a dataset with only 5 Dimensions using different coding schemes.

Structure Mapping does not create new data, it should not be thought of as a mechanism to aggregate data, only to re-organise and re-code it.

A simple example is a relationship between the source COUNTRY component to the target REF_AREA component. The Structure Map has a source COUNTRY and target REF_AREA, the rules used to define how the values are mapped are maintained in the corresponding Representation Map, an example rule would be GB maps to GBR, US maps to USA, and UY maps to URY.

The Structure Map defines the source and target DSD or if the mapping is Dataflow specific, the source and target Dataflow. The source DSD/Dataflow is the one from which the data will be input into the mapping. Whilst the mapping rules are bi-directional (data mapped one way can be mapped back again) for more complex mappings, which include regular expression matches or substring matches on the source, it is not always possible to map back again. Therefore the source DSD or Dataflow should be selected based on where the data is coming from, and the target is where the data is going to as a result of the mapping.

The most simple relationship is 1:1 mapping, an example being REF_AREA maps to COUNTRY.

More complex relationships allow for the combination of reported values across multiple source components to influence what is output in the target, for example REF_AREA in combination with CURRENCY maps to CURRENCY_DENOM. 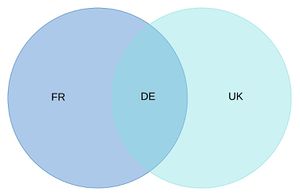 Finding the mapped output using the intersection of each output set

Representation Maps can include complex rules, such as regular expressions on source values, and can even define periods of time for which a mapping relationship is true, for example if a relationship between source country and target currency is defined then one could map France to the French Franc up until 2002 and then map France to the Euro from 2002 onwards.

If a values do not require mapping, for example if source FREQ maps to target FREQ and the values are the same in both the source and target DSD, then the Component Map should not link to a Representation Map. The lack of link will inform the system that the value should be copied across verbatim.

A Structure Map may also define relationships between a source Component and target Component where the value in the source is a representation of time, which needs to be converted to conform to SDMX Time Formatting.

The output of a time mapping is always a date in SDMX format. The date must be mapped to a specific Frequency formatting, this is either defined as a fixed value, or can be linked to the value in another Dimension. For example output Frequency=value reported in FREQ Dimension (in the target DSD).

This is used if the source Component represents time as a number, the number represents the number of epochs since a base period, and each epoch is a fixed interval of time. An example is UNIX time which is the number of milliseconds since 1970. When defining this mapping, the source Component requires the base period (e.g. 1970), the epoch interval (milliseconds) and the output Frequency (fixed value or based on another dimension value).

This is used if the source Component represents time as a string which conforms to a particular pattern, for example mm-dd-yyy (month, day, year). Each pattern can be mapped to a specific frequency, or the general rule of outputting according to a Frequency Dimension can be used.

The following patterns are supported:

Many Outputs from a Single Source

An example use case is a Dimension with ID UNIQUE_KEY whose values are used to uniquely define a series, example SER1, SER2, SER3. The mapped DSD splits this into multiple Dimensions FREQ, REF_AREA, INDICATOR. The mapping rules split the unique key SER1 into FREQ:M, REF_AREA:UK and INDICATOR:EMPLOYED. Another unique key would map to a different breakdown of values, for example SER2 maps to FREQ:M, REF_AREA:FR and INDICATOR:EMPLOYED.

In this example, the unique Key SER1 would be mapped to M, UK, EMPLOYED.

Solution 2
An alternative solution to this mapping is to create a single Component Map which maps the source UNIQUE_KEY to three outputs FREQ, REF_AREA, INDICATOR.

Summary
The choice of whether to split the mapping up into separate components vs a single rule should be based on what will be more maintainable, understandable, and can individual mapping rules be reused by other structure maps.

Many Sources map to a Single output

If-Then-Else (default if not specified)

Source data will first be checked against the exact match rule (A maps to B), followed by each regular expression rule until a match is found. As the last expression matched on anything, this can be considered as 'if nothing matches then output _Z'.

A rule can be defined to match a specific pattern, which is then used in the output. For example the rule can state any three characters followed by a number is converted to the same three characters without the number. This can be satisfied by using Regular Expressions to match the input, with a capture group. A capture group is where the regular expression rule is in parentheses which can then be referred to by number (capture group 1, 2, 3, and so on).

This example consists of 2 capture groups:

The output expression then reverses the order of the information by outputting capture group 2, an underscore, followed by capture group 1.

An example input for the above expression, and corresponding output is as follows:
Input = ABC_1
Output = 1_ABC

This use case is where there is more then one source Component for a Mapping, example CURRENCY and REF_AREA. The value for one of the source components is based on a pattern, and the value for the second component is based on what matched the first pattern.
Like the pattern match on output, this rule makes use of regular expression capture groups to copy matched information from one rule to another. The capture group (everything matched in the parenthesis) is referred to by number, with a leading slash \.


In this example the first input matches on anything, but the REF_AREA rule is using the matched value from CURRENCY, defined by capture group \1, followed by _X. The following shows a match and a miss:
Match: CURRENCY=USD, REF_AREA=USD_X
Miss: CURRENCY_USD, REF_AREA=US_X

This use case is converting source data with multiple Measures (example BIRTHS, DEATHS, MARRIAGES) to a DSD with only one OBS_VALUE. In this case the Measure may want to be converted into a Dimension value, for example INDICATOR.

The dataset should be mapped to convert the BIRTHS, DEATHS and MARRIAGES to the INDICATOR B, D, and M respectively. The observation value is the value of each corresponding measure.

This mapping relationship can be defined by mapping each source MEASURE to both the OBS_VALUE component and the INDICATOR component. The rule for the INDICATOR mapping should be a single 'catch all' regular expression, which maps the particular measure to a fixed value.

Where the [anything] rule is simply the regular expression .*

Structure Mapping can be a complex task, if multiple sources influence many targets, and rules include regular expressions and substring matches, then it is important to test the mapping to ensure the outputs are as expected.

The Fusion Registry provides a testing feature, to use this, first login to the Fusion Registry, navigate to the Structure Map page, select the Structure Map to test and click on the Test Mapping button. A data file must be loaded which conforms to either the source or the target DSD. The datafile may be in SDMX format, or CSV. If loading CSV, ensure the column headers match the Component Id.

Mapping reports are generated at the level of each row of information, if loading time series data, a row should be thought of as a single observation along with all the series information. The report will describe the output row for each input row.

The Fusion Registry can perform finer grained reports detailing exactly how a specific row was mapped, in the User Interface this is achieved by clicking on the row. The mapping report is broken down into each mapping rule in the structure map, what the input was for the rule, what and what the output were.

The Fusion Registry Transformation services can use a Structure Map to apply to the conversion of data.