Item Validity allows for codes and concepts to be specified as being valid for specific periods of time. This is useful for when codes in a Codelist need to be re-assigned, or discontinued. Without Item Validity the way to achieve this would be to create a new Codelist which has the changes and then migrate the users of the existing Codelist to use the new Codelist.

Item Validity can be applied to Concepts in a Concept Scheme or Codes in a Codelist, a Hierarchical Codelist or a Codelist Map.

The Currency Codelist (version 1.0) contains the codes for all currencies. With the introduction of the Euro and the discontinuation of existing currencies (DEM and FRF), a new Codelist must be created (version 2.0) which contains only the codes that are to be used. Each version of the Codelist should have a date that states when it should be used. For Codelist version 1.0, this is up to Jan 1, 1999 and for Codelist version 2.0 this is from Jan 1, 1999. Any codes that don’t change are reflected in both Codelists.

Item Validity can overcome the overhead of creating a new Codelist. In the existing Codelist, items can be discontinued by adding a date stating when it is Valid To. Since DEM and FRF need to be discontinued, these are given a “Valid To” date. 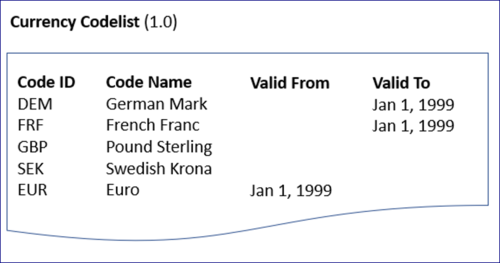 If a code needs to be re-assigned because its use has changed, without the use of Item Validity a new Codelist must be created. Consider the example of the Gilbert and Ellice Islands which was a territory that existed until 1976. The following illustrates an example Codelist of Reference Area:

With the dissolution of the Gilbert and Ellice Islands, the code “GE” is re-assigned to Georgia and Georgia’s existing code (“XX”) is discontinued.

With the use of Item Validity, a single Codelist can discontinue the use of the code “GE” to mean the Gilbert and Ellice Islands and re-assign it to Georgia. The use of Valid From and Valid To dates means that codes can be terminated and re-assigned as desired.

It is important to note that in the example above the Reference Area Codelist has two entries for the code “GE”. This is not permitted in a “standard” Codelist. However, since each of the GE entries has a Validity Period and these Validity Periods do not overlap, this is permissible. At no point in time are both codes valid simultaneously. If a further re-assignment to the code “GE” it is possible to have more entries for “GE” provided that the Validity Periods do not overlap.

The Codelist Wizard in Fusion Registry allows the user to create and edit Codelists. In Step 1 of the wizard aside from the standard elements that make up a structure, the Codelist wizard adds a further choice control which allows a Codelist to be defined in one of three forms:

It is not possible to assign Validity Periods to both the Codelist and individual codes. 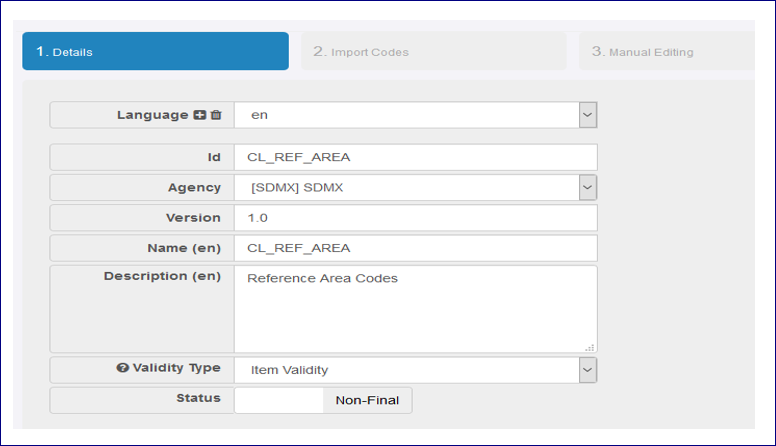 Codelist Wizard – Assigning a Validity Period to an Item

The third step of the wizard allows the user to manually add, edit, and delete Codes in the Codelist. For editing and deleting codes, if the Codelist is of type “Item Validity” then the edit window will have entries for “Valid From” and “Valid To”. If it is a “standard” Codelist these fields will not be present. 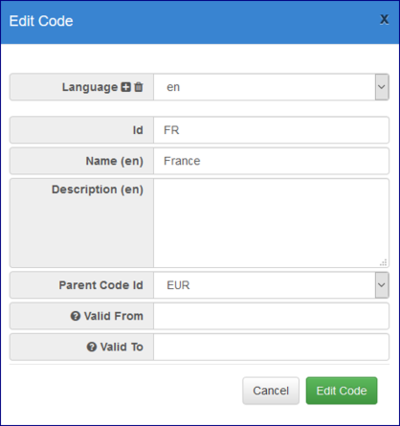 Simply editing the “Valid From” and “Valid To” fields is enough to specify Item Validity to the currently edited item. The input takes SDMX Datetimes, so such values as 2001-Q1 and 2002-W50 are also permitted.

To add Validity Periods to items in a Concept Scheme, the Concept Scheme wizard follows the same approach as the Codelist Wizard, except that on Step 3, it is not permissible to assign multiple validity periods to the same code.

The Hierarchical Codelist does not permit the setting of an item type in Step 1, like the Codelist and Concept Scheme wizard. Instead on step 3 Validity Periods are assigned to an individual item via the control “Add Validity Period”.

It is permissible to add multiple Validity Periods to a particular item if desired.

Step 4 of the Codelist Map Wizard allows for the definition of a Code from a source to a target. On this step it is also possible to add a Validity Period to a single mapping

If a mapping has a validity period, it is shown with a calendar icon to state that this mapping is date dependent. To assign, remove or edit a Validity Period for a mapping, activate the button labelled “Modify Validity Period” and the following modal is displayed: 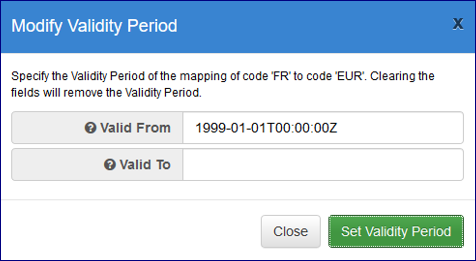 The input for each is an SDMX datetime. Clearing the values and clicking “Set Validity Period” will remove the mapping.

When viewing the list of Codelists in the system, the Validity Type (as defined on Stage 1 of the Codelist Wizard) is displayed in the lower half of the screen. This value will either be “Standard”, “Item Validity”, “Template” or “Generated”. 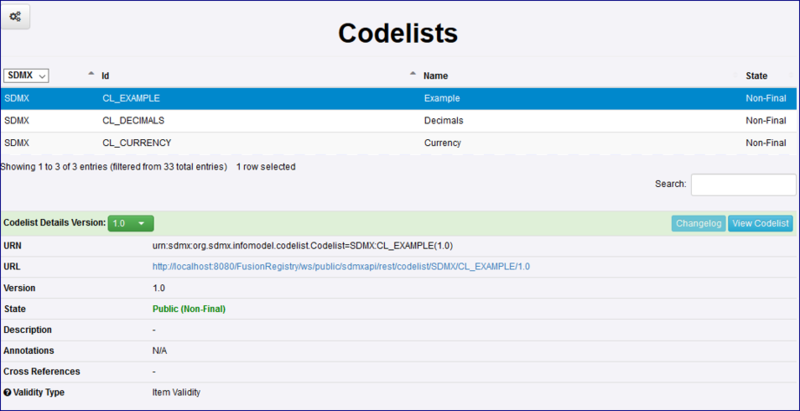 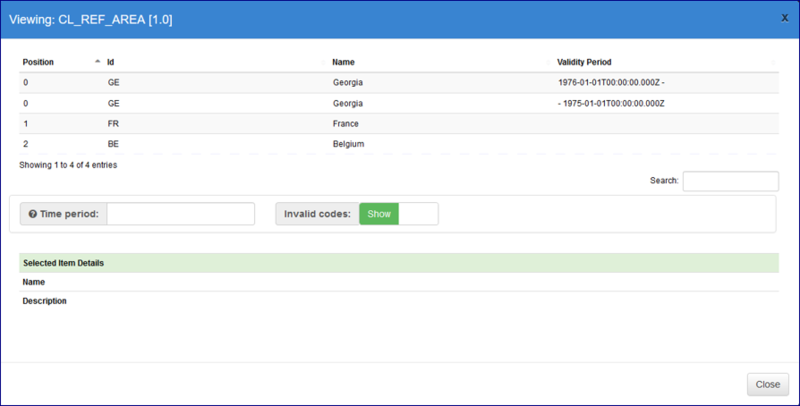 Note that there may be duplicate rows for the same ID and that for these rows, the position is the same. Any rows which are considered invalid for today will be rendered in grey text. In the middle of the screen are controls for the time period and display of Invalid Codes.

The “View Time” is the time that the user is viewing this Codelist. By default, this will be blank. A blank value infers the current time.

The user may select a datetime by using the Time Period input field. This field allows the user to type in any valid SDMX Datetime Value (e.g., 2001-Q4) and when return is pressed, the table updates making any of the codes which are not valid for that time turn grey. This allows the user to see the state of a Codelist for any point in time.

For viewing Hierarchical Codelists, Code Maps and Concept Schemes the same controls as in the Codelist will be available for those structures that have items with Validity Periods.

The following illustrates an example of how Codelist Templates work:

When the Template is submitted to the Registry, the following structures will be created:

The reason that there is a jump in version in the generated Codelists from 1.2 to 2.0 is that the 2.0 Codelist represents a non-backwardly-compatible change.

If the template is modified and then re-submitted, the existing generated templates are removed from the Registry and replaced by the new Template submission.

Deleting a Codelist Template from the Registry, will delete all Codelists that were generated from that Template. Templates may not be referenced by other structures and it is also not possible to convert a Template into another type of Codelist (e.g., Item Validity).