To export structures, use the left-hand menu to select the Bulk Actions (if you are logged in) or the Export Structures menu item if you are not logged in. The example below uses the Metadata Technology Demo Site found here: 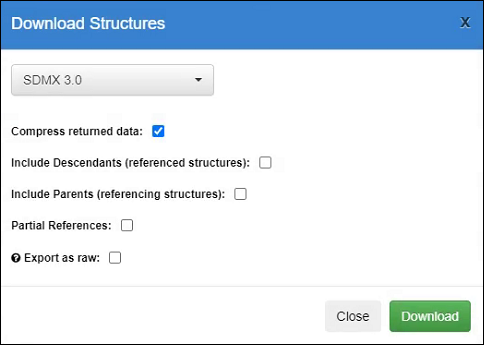 By default the structures will be exported in a zip file.

You can use the Include options to include structures and Maintainables which have been used (Decedents) when the structure was added/edited and in turn which structures refer to (Parents) the chosen structure.

Partial References Restricts lists to only include items used by the Structure(s) being exported. Raw If exporting as 'raw', any codelists that extend other codelists will not include codes from the 'parent' codelists. The codelist will only include codes that were definied within in.

If the format is Fusion JSON, then references to the 'parent' codelists will also be included.

If not exporting as raw, codelists will include the codes that are inherited from their parents.

Structures can be exported in a downloadable file from the Registry in several formats. 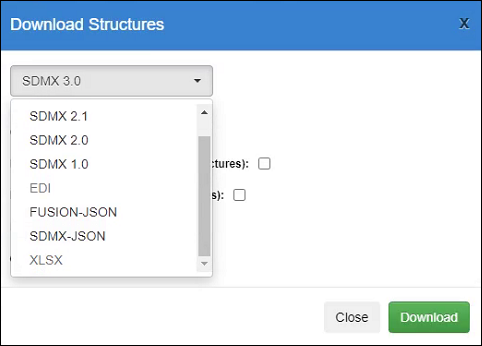 Tip: if you are Exporting all structures, select the file type FUSION-JSON as this will include all non-standard structures as well as the SDMX structures.

Structures can also be exported via the Web Services option as explained in the diagram below.