An SDMX Data Structure Definition (DSD) provides a template which describes the dimensionality of related datasets in terms of their dimensions, attributes and measures. 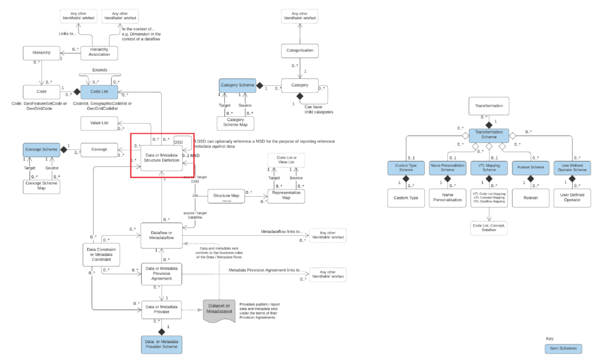 Data Structure Definitions (DSDs) are used to describe the structure of datasets by specifying their constituent Components:

and optionally the Representation for each Component.

Each Dataflow references a single DSD which describes the structure of the dataset that the Dataflow represents.

The SDMX standard does not preclude using lowercase or mixed case for structure IDs. However IDs are case sensitive meaning that a DSD with ID 'NATIONAL_ACCOUNTS' is distinct from another named 'National_Accounts'.
TIME_PERIOD
For Time Series DSDs, the Time Dimension Component is conventionally given the ID 'TIME_PERIOD'.

The Series Key is the dot (.) concatenation of the Dimensions in the order specified in the DSD.

For the DSD above, the Series Key is constructed as follows:

Attributes do not form part of the Series Key so have no explicit or implied ordering.

Attributes
Attributes allow extra concepts to be added to the dataset to provide additional information about the variable being measured such as the unit multiplier or observation status.
Attributes are unique in that they must be attached to specific levels in the dataset at DSD design time.

Primary Measure
All DSDs must have a Primary Measure Component, which is used for the observation value of the main variable being measured. Like all components, the Primary Measure must reference a Concept. For many series, the measure is numeric, but does not need to be so.

Time Dimension
A Time Dimension is required for DSDs representing Time Series datasets. Again, the Time Dimension must reference a Concept which should have an appropriate time representation - typically Observational Time Period.

In designing a DSD, attributes must be attached to specific levels in the dataset.

Example 'Demography' DSD with Attributes attached at the Series and Observation level: 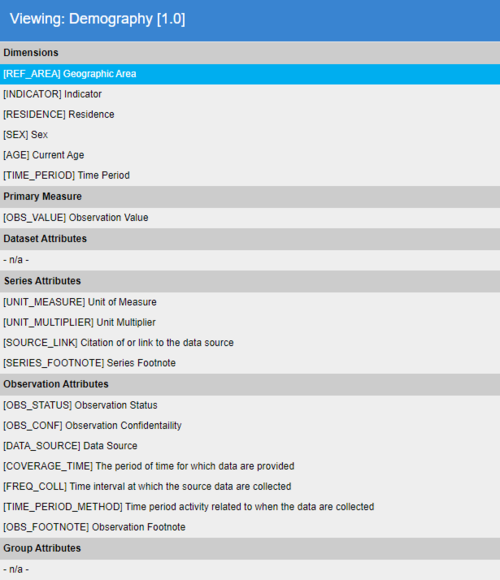 DSDs for Time Series are characterised by having an explicit Time Dimension.
In combination with the DSD's other Dimensions, the Time Dimension uniquely identifies an individual Observation within a Dataset.

DSDs can be designed for non Time Series datasets by excluding the Time Dimension. This supports use cases like census statistics which, although the observations are from a fixed point in time, there's no sequence of observations over a period of time.