The Kafka Integration function is available to logged-in users and found on on the Main menu.

Fusion Metadata Registry can act as an Apache Kafka Producer where specified events are published on definable Kafka topics. It consists of a generalised ‘producer’ interface capable of publishing any information to definable Kafka topics, and a collection of ‘handlers’ for managing specific events.

At present there is only one event handler Structure Notification which publishes changes to any structures as they occur, this also include data registrations.

For changes or modifications to structures, the body of the message is always an SDMX structure message. The format is configurable at the event handler level, the structure producer can support any structure output as long as the registry is aware of the VND header, however the UI offers the following choices:

Fusion JSON is recommended if the Registry is being used to support non-sdmx structures (which cannot be described in SDMX-ML), for example Reporting Templates and Validation Schemes.

A ‘tombstone’ message is used for structure deletions with the structure URN in the Kafka Message Key, and a null body.

The list of supported events that can be published to Kafka will be extended over time.

Other events envisaged include:

Configuration is performed through the GUI with 'admin' privileges.

Before Kafka can be used, a connection must be defined the Fusion Metadata Registry to a Kafka server (or servers), taking note of the following.

The Registry supports one connection definition to one or more bootstrap servers. Each server connection can be separated by a comma. The UI displays all connection properties supported by Kafka, and displays the default value that will be used when not explicitly set.

Whilst Kafka does not enforce transactions, the Registry does. A connection will default to using the transaction prefix ‘tx’. The documentation states that this can be null, which is not the case for the Registry.

SSL is supported provided that:

Kerberos integration can be achieved by providing a value for the sasl.jaas.config property. This property expects a new line per configuration setting, in the UI the text area is provided to support multiple lines.

The connection definition supports the max.request.size property, which will enforce a restriction on the maximum size of the message that can be sent. Additional restrictions for this can be defined on the Kafka server, and the Kafka topic, which are both configured outside of the Fusion Metadata Registry. It is important to ensure the server and topic can also handle large request sizes if this property is changed in the Registry. It is important to note that the max request size refers to the size of the message BEFORE any compression is applied. This is a behaviour of Kafka and cannot be modified. When the message is sent, both the topic and connection will apply the max request size on the compressed message (if compression is enabled) and therefore these can be set to a lower threshold. 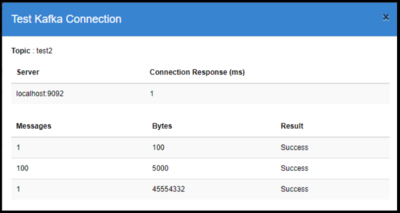 The Fusion Metadata Registry ensures the bootstrap servers can all be connected to before the connection is saved. However, the test function should be used to ensure the following:

Note 1: the last test generates a large message (up to the number of bytes specified). As the message contains a lot of repeated text, the compression (if set) will make the final message size very small. If the intention is to also test the message size against the topic and kafka server, then ensure compression is set to none before running the test.

Note 2: The test is run against the applied configuration, remember to apply changes BEFORE running the test.

Showing the UI for the Structure Producer

The Structure Producer uses the Kafka connection to send all structural changes. However, before the structure producer becomes operational, it must be assigned to the Kafka topic to use, and must be given a message format to notify structures in.

The structure producer will not become active until it is started. The first time the producer is started it can either:

The transaction Id shown by the structure producer match those shown in the Registry RSS feed.

The structure producer can be suspended at any time by clicking on the 'suspend' button. Note, that this only suspends the producer for as long as the Registry is running. On Registry restart, the producer will always attempt to start if it can. To remove the producer permanently, use the 'delete configuration' option.

Kafka is able to detect and handle transitory errors, such as the Kafka server becoming unresponsive for a period of time, there may be occasions where a message simply cannot be sent and no amount of re-attempts will fix this. An example failure is when the message size exceeds the limit set on the connection, server, or topic.

When a failure condition is met by the structure producer which cannot be resolved through re-attempts, the structure producer is shut down, with the transaction state being recorded as failed. It is strongly recommended to configure the Registry to use an email server, and enter an Admin email address for the Structure Producer. When there is a failure, the Registry will send an email to this email account, which will include the error message (also found in the Registry log files).

Message publication has been designed to be 100% reliable, with messages sent in the same sequence that the Registry processed them.

When a message simply cannot be sent, for example the Registry can no longer authenticate with Kafka, or the message size exceeds limits set, the producer is stopped and emails are sent to notify of the failure. Once the problem is rectified and the producer restarted, the Registry will replay any pending transactions that occurred during the period of time for which the producer was stopped.

The Kafka logs are only set to SENT when the Registry has been notified by the Kafka server that it has successfully received the message.

The following Fusion Metadata Registry events are available for publication on a Kafka service.

SDMX Structural Metadata is published to definable Kafka topics on Fusion Metadata Registry start-up and each time structures are added / modified, or deleted. Metadata-driven applications can subscribe to the relevant topic(s) to receive notifications of changes to structures allowing them to maintain an up-to-date replica copy of the structural metadata they need.

Example use cases include: 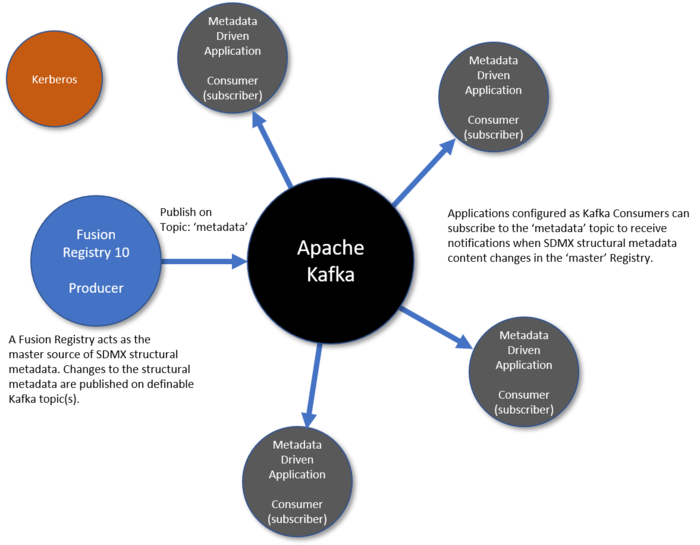 The SDMX Structure URN is used as the Kafka Message Key. Consumers must therefore be prepared to receive and interpret the key as the Structure URN correctly when processing the message. This is particularly important for structure deletion where the Message Key is the only source of information about which structure is being referred to.

The Kafka Message Body is a normal SDMX structure message, except in the case of deletions where the message has no content (a null payload), and the structure to delete is identified exclusively by its URN in the Message Key. The format of the SDMX structure message is configurable via the web service, or UI (which only offers SDMX 2.1 and Fusion-JSON) for simplicity.

Addition and Modification of structures both result in an SDMX 'replace' message containing the full content of the structures. Deltas (such as the addition of a Code to a Codelist) are not supported.

Deletion of structures results in a 'tombstone' message, i.e. one with a null payload but the URN of the deleted structure in the Message Key.

If a single structure is added or changed, the transaction will contain just that structure.

Transactions will contain multiple structures in cases including:

Subscribers to the Kafka topic must be transaction-aware, and must ensure that each transaction is processed atomically to maintain the referential integrity of their structural metadata replicas.

It is possible to send the full registry structural metadata content to the Kafka topic. This can be done when the structure producer is started for the first time, or after it has been suspended. On restarting the producer, select 'Full Flush'.

Note Be mindful of the maximum message size that the connection has been configured to support. Also note the size check is performed by the Registry BEFORE the message is compressed - this is not a behaviour of the Registry, it is the behaviour of the Kafka libraries.

Not Supported: Subscription to Specific Structures

The current implementation does not allow Kafka Consumers to subscribe to changes on specific structures or sets of structures, such as those maintained by a particular Agency. Consumers subscribing to the chosen topic will receive information about all structures and will need to select what they need.

Structure changes made on one instance of Registry in a cluster are replicated to all of the others through either a shared database polling mechanism, or by Rabbit MQ messaging. An instance receiving information that structures have changed elsewhere in the cluster updates its in-memory SDMX information model accordingly. The update event is however trapped by its Kafka notification processor and published as normal.

Changes are required to the Kafka event processing behaviour of Registries operating in a cluster to arbitrate over which instance publishes the notification on Kafka such that a structure change is notified once and only once, as expected.

kafa_producer_config This table is used to link a Fusion Metadata Registry Producer (i.e. the structure producer) to a topic, and message format