The Role Mapping function is available to logged-in users and found on on the Security Settings menu.

Please refer to this article.

To change a Role Mapping, click the relevant option to open the Role Mapping modal which will display the name of the Group in Active Directory and the Organisations in the Registry that have been mapped to the Group.

To add another Organisation to the AD Group, select it so a tick appears in the relevant box.

To remove an Organisation, simply untick.

Once you have finished editing, click Assign to return to the Role Mapping page.

This can be achieved by using the tool as shown below.

Export Mapping to a CSV file

This option allows you to export an excel CSV file, How this file appears will depend on what you use to open it with.

Import Mapping from a CSV file

This option allows you to paste in text as shown in the example below. 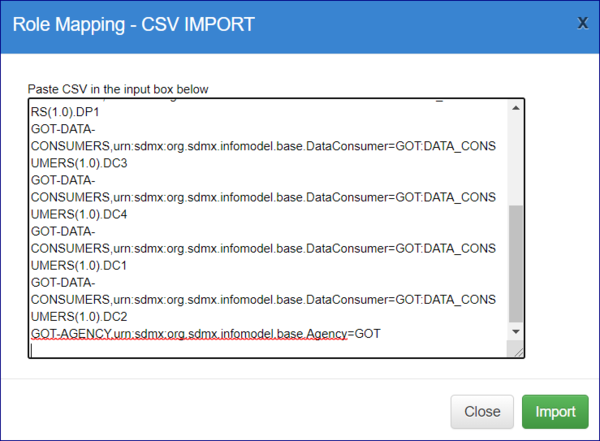 Provided that the text is correctly entered, the role mappings will be created for you once the Import button is clicked.

A comma is needed between the AD Group and the text (for example) urn:sdmx:org.sdmx.infomodel.base.DataProvider=GOT:DATA_PROVIDERS(1.0)

In this example the text to enter would be as shown below (with additional lines for DC2 - DC4 and DP2 - DP4).

You will need to manipulate the files exported via the Role Mapping page.


In this example, I have opened the CSV file using Excel and have used the concatenate function to create a file in the correct format. The column "Concatenated" is the copied and pasted into the import box.


In this example I have opened the CSV file using Notepad and used find and replace to remove the " characters.

If you wish to add an Administrator, enter the Name of the AD Group and tick the box Administrator as shown below. 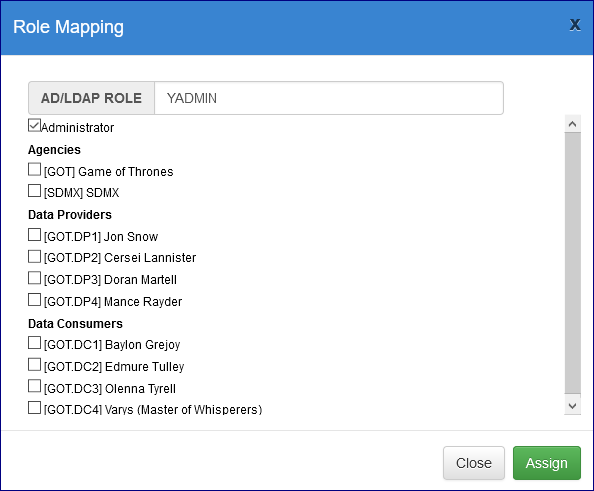 If no Role Mappings are defined, the Registry will communicate to Active Directory using a Role Template. In this scenario, users are given permission by assigning them to groups and the names of the groups follows a specific pattern to provide authorisation.

To set up roles permitting Agency level authorisation, groups for the appropriate agency must be named “ACY_” and then be followed by the agency name. E.g. A group which permits users assigned to that group to modify SDMX structures, must be named “ACY_SDMX”.

To create a group that permits Administrator access to the Registry, the group needs to be named “Administrators” (this is not case sensitive).