The Fusion Data Browser shows a Series List when a selection is made from the left nav bar. The list of series are for a single dataset, which may have been pre-filtered depending on which selection was made in the Navbar. If the user selected 'Japan' for example followed by Exchange Rates, then the dataset would be Exchange Rates, pre-filtered to show only series for Japan. 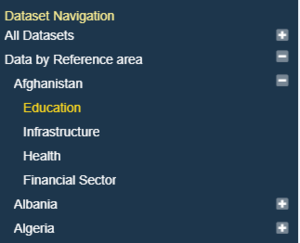 The series list show a limited (200) number of series that match the selected Dataset and filters, the series are displayed in no particular order, and no pagnation is provided. Export and Graphing controls are provided which enables the user to export or chart the full set of series (including the series not shown in the list due to the imposed list size limit).

Quick Filters are placed at the top of the series list, and a link to an Advanced Filter is also provided.

Individual Series in the Series List can be selected, if individual series are selected, and additional menu item is displayed enabling these series to be graphed, exported, or added to a Series Basket. 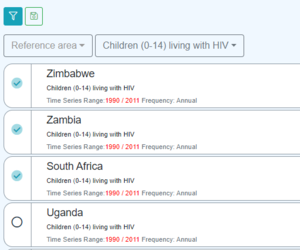 Each Series List item provides an overview of what data it holds in it's title, subtitle, and footer - all of which are generated based on the Series List Configuration. When a Series List is expanded, the full details of the Series are provided which include the Dimension values and Series Attributes. A small, interactive, time series chart is also displayed as well as export functions for that series.